Istanbul is the only city in the world that spans over two continents. Europe and Asia. The city embodies mystery, intrigue, and glamour which left most other cities long ago. While the museums, palaces, great mosques, and bazaars seem inexhaustible, there’s also an unexpected natural beauty. From the shores of the Bosphorus at sunset, the red evening light reflects in the windows on the opposite shore and you understand what attracts people to this glorious city.
Rumeli Fortress
The Rumeli Fortress, or Rumeli Hisari, was built in 1452 by Sultan Mehmed The Conqueror as a part of his efforts to conquer the city of Constantinople. Located at the narrowest point of the Bosphorus on the European side, it is strategically placed for the control of ship traffic on the Bosphorus and is located immediately opposite Anadolu Hisari, which was built by Yildirim Beyazit I sixty years earlier. With a fortress on either side of the Bosphorus, it was the first step in Mehmet?s plan to capture the Byzantine capital.
Hagia Sophia
Hagia Sophia: The most renowned Byzantine cathedral and the bestknown Christian church in Istanbul. The first church was built between 325-360 AD. Construction was begun during the reign of Constantine and completed by his son Constantius (337-361 AD.). Being the largest imperial church in the city it was known as the Megalo Ekklesia. The name Hagia Sophia (Sacred wisdom) was adopted in the fifth century, and it was by this name that the cathedral continued to be known throughout the Byzantine era, being corrupted in the Turkish era to Ayasofya.
Leander's Tower
Buit on a small rocky island in the middle of the sea near Uskudar,where the Marmara sea meets the Bosphorus,the Leanders Tower - also called as Maidens Tower - has been used for a variety of purposes since its first construction.It has become symbol of Istanbul, and is one of the first things which comes to one’s mind about this city and has been subject of many paintings and pictures. It has recentyl been renovated and opened for sightseeing.

Dolmabahce Palace
Located along the coast of the Bosphorus in Besiktas, 300 yards from the Besiktas ferry-boat quay, this palace is the greatest imperial Ottoman residence. It was constructed by the Armenian architects Karabet and Nikogos Balyan for Sultan Abdulmecid (1839-61) who preferring a more modern residence, decided to move out of the Topkapi Palace.

The complex is located opposite Hagia Sophia Mosque in Sultanahmet square. It was built by architect Sedefkar Mehmed Aga for Sultan Ahmet I.

The construction of the complex began with a large ceremony in 1609. The ceremony was attended by the great religious leaders of the day, such as Seyhulislam Mehmed Efendi, and notable state figures like Aziz Mahmud Hudai, Sadrazam Davut Pacha and even sultan himself were present at the laying of the foundations. The construction of the magnificent complex lasted for a quite a time, with the mosque being completed in 1617 and rest of the structures in 1619.

ask for domestic flights from izmir,bodrum or İstanbul

Name and date of tour(s), Number of persons in your group

How To Pay fro your excusion or tours
We accept all credit cart pounds £ , Euro or US$ cash money for the payment of services. 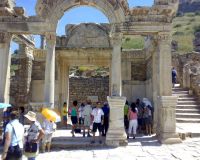